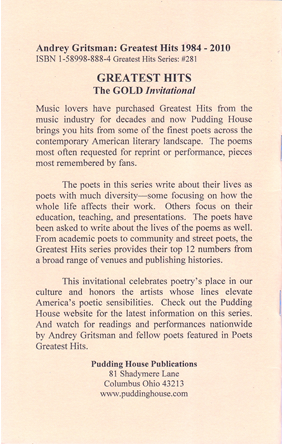 I was born in Moscow, Russia, in February 1947, just a year and a half after the Great War—World War II or how it was called in the Soviet Union, the Great Patriotic War—had ended. In a strange way I was proud of the fact that I’m the only one, whom I know out of my generation, who still had a food ration card from the World War II. It was my mother’s, and it was given to her for me, but it was circa World War II, 1945. They were discontinued sometime in the spring of 1947.

My parents’ generation was very much affected by the Great War, as well as by Stalin’s repressions, and Khruschev’s notorious partial “thaw.” We could be called Khruschev’s generation; that was (historically speaking) a short period of time of a very minor, but relative relaxation of the totalitarian regime, short-lived and half-hearted.

I am a physician. Both of my parents and my grandfather were physicians and were also graduated from the First Moscow Medical School. In 1981, my immediate family and I immigrated to the United States, where I went through the entire long medical training, and now work as a physician, a diagnostic pathologist, and a specialist in cancer diagnosis. My life was split in two—before emigration, before 1981, and after, until current times.

Most likely, it influenced the duality of my culture: I write both in Russian and in English, and my sensibility is mixed. After almost thirty years in America, I feel myself to be very American, but at the same time, as a curious onlooker, a scout, investigating life in America a bit from the outside, while pretending, and being, on the inside.

I started writing poetry in English accidentally. I never foresaw that; it was neither anticipated nor planned. In the course of a conversation with a native Russian speaker, we engaged in some interesting, philosophical-artistic discussions, and, as a response, I wrote a poem in English. This was the most natural way for me to respond to that challenge. Later I realized that this is a natural response for me altogether. Not being able to explain certain things very logically or rationally, I found my method of persuasion in writing poetry. It is, at the same time, a response and an instrument in studying life and expressing my ideas, but mostly, my feelings.

For many years I felt, and recently completely crystallized for myself, that poetry is not really a literature, not a “social phenomenon” for a person (for society, of course, it is), not a vehicle carrying a medium to some important or desired place. This is a natural narrative of the soul, perhaps, in the metaphysical sense. Therefore, poems are really not “written”; they happen.

This is precisely what occurred with my first poem in this collection, “This Is a Test.” I was driving on a highway in the suburban area of New Jersey, not far from the George Washington Bridge, and heard on the radio an announcement alarm: “This is a test.” I stopped for coffee in one of the suburban malls, sat down at the table, and wrote this poem on a piece of a napkin. The tone came from outside, and it fell on the right soil in the soul. Rather often, the surrounding landscape is nothing but a backdrop, props for the poet, for writing a certain poem.

A similar story occurred with my poem, “Domestic Paganism.” I literally woke up one day and thought for a moment about our immigrant life with our kids, growing up in America, but also having mixed sensibilities and experiencing influence from outside. This reflection inspired “Domestic Paganism.” And, of course, the cat is always a symbol of enigma, philosophy, and some continuity.

Life is a departure from childhood, and to a great degree, it’s one of the main themes of lyrical poetry. When children grow up and someone else becomes closer to them than yourself, you become detached from your own offspring. The poem “Return” is related to understanding of inevitability of this detachment and departure from our son, who was little at the time. But for that moment, I actually felt the whole development of the future life drama. It doesn’t have to be necessarily a tragedy, but is dramatic nevertheless.

“Kalinin/City of Tver” is a glimpse in my own childhood, when I lived for some time with my parents in a provincial city of Kalinin (the ancient city of Tver) on the river Volga. It was invaded by the Mongol hordes in the Middle Ages as well as by the Nazis in World War II. The whole valley of the Volga River is exposed to the demons of the previous calamities and invasions. I didn’t know about this as a little child, but somehow could sense that. I also related that to the big battles in “The Greek Legends,” a popular book at the time in my generation. Interestingly, this poem received a Pushcart Prize Honorable Mention, after it had been published in Paper Street in Pittsburgh, a city also standing on a big river.

The poem “Holocaust” is also related to my childhood, to my beloved grandmother and grandfather. My grandmother’s entire family, who were from the city of Lodz in Poland, perished in World War II, having been exterminated by the Nazis, in the Lodz ghetto. Throughout my childhood I heard my grandmother talking about this, about missing her family, her mother and her sisters, for years.

“Unborn” was “born,” actually, in the moment just after I saw a picture in the hospital where I worked as a pathologist of an embryo peering out of an open fallopian tube. It was a pathology specimen. But it expressed so much grace and beauty, purely aesthetical, that this poem truly did write itself. Of course, afterwards there was a lot of interpretive misunderstanding about some possible ideological overtones of this poem, but “Unborn” is completely irrelevant to any ideology and beliefs. It is a statement of the absolute character of aesthetics and beauty.

Life is a series of departures, moves, losses, and attempts of adjustment to a new milieu. “Room” is my home that I carry with myself everywhere I go, a space which I fill with my images, metaphors, and with shadows of the dear ones.

The poem “Letter” is a letter to one of the silhouettesin my past, and “I only feel the touch of light sadness, only light sadness.” These traces of love, attachment, and affection live in me. This is a feeling of the passing transparent connections, like in my poem “Triangle.”

If poems are real, if they are living beings, then even a formal or even sometimes superficial event, as a poetry reading or reception, can carry the imprint of real drama behind it. But this is true only if the voices heard are real voices reflecting metaphorical drama. This occurs in the poem “Reception” and, needless to say, in our poems we often talk to dead relatives, our lamentation directed toward lost ones, yearning to what we no longer have. And the social satire is always a good, healthy setting for a lyrical poem.

The “Greatest Hits” series is concluded with two poems, “Bed, Bath and Beyond” and “In Memorial, for My Mother”, which obviously reflect our life in New York: intercepting lives, destinies, glossolalia of multi-accented voices. This is that melting pot, where we live, love, but never really leave. My mother left us last October 2008, and that brings the life cycle back to the beginning: “My childhood ink and milk.”

Who gives the right to a foreign poet to write in a non-native language? Knowledge of language is, of course, necessary, but not sufficient. This right is conveyed by the artist’s destiny. “Do not compare, the living is incomparable!” (Osip Mandelshtam).

A foreign artist feels the new world and gives new names in his/her new language, stained with his/her accent and the indelible mark of destiny. Poetry is a form of direct speech, reflecting real (and virtual) life of movement, displacement, and inhabitation of a new territory. A poem represents that direct speech and personal communication, although in a metaphorical form. Penetration into other cultures, finding the common language of poetry, which by definition is an indirect, metaphorical language, allows the achievement of this mutual understanding between an artist and the surrounding milieu, though at first foreign.

A poem is a composition on a free theme. It is not culture, that is, the language is secondary (forgive me this sacrilege). Art exists, first of all, in the artist, and only then, in society. One does not speak the words of the poem with the lines of the verse, no matter how professional they seem. The artist speaks the words of the poem with his own direct speech, infused with his own cadence and inspired by his own soul. However, the language dictates a way how the poem is to be created.

Poetry is an autonomous process and uses an obligatory emotional conflict of the poet with the surrounding world. The poet overhears the sound, the stimulus for the creation of a poetic text, that preexistent sound (condensed emotion-thought). This may be the sound of real life outside the window, on a train, on a street corner. These are the signals that a poet metaphorically transforms into live verse. A poet feels it only because the power field or the sound field exists in the surrounding air, the air which the artist breathes. The sound “from above” coincides for some moment with an inner emotional readiness and maturity of an author for the new creation. This sound may be incidental, such as the clattering of a train, the voice of a hotdog man, or the pause of silence that occasionally interrupts the street noise.

After the first seven years of my life in America, the nostalgic feeling for the lost home back in Russia subsided. I acquired this newborn homelessness, as if a second birth, but with a genetic memory of the former life. I was waiting for my own voice for a rather long time, but it was worth it. I started “speaking poems” with my own intonation and in my own voice, first in Russian, and then in English. It took some time of my living here to acquire my right to my poetic voice. The voice matured and has been resounding, describing my new life and reflecting a new sensibility. Poetry, first of all, is a reflection of destiny, a revelation of the soul—glossolalia of the soul—an attempt to understand the philosophy of life, using the sensory, metaphorical instrument of poetry given to the author.

And having said all that, I feel that life and every new poem in this life “is the test, only a test.”